Algorithms used in VASP to calculate the electronic groundstate 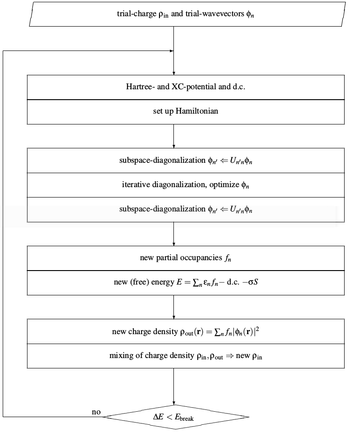 Most of the algorithms implemented in VASP use an iterative matrix-diagonalization scheme, where the used algorithms are based on the conjugate gradient scheme [1][2], block Davidson scheme [3][4], or a residual minimization scheme -- direct inversion in the iterative subspace (RMM-DIIS) [5][6]. For the mixing of the charge density an efficient Broyden/Pulay mixing scheme [6][7][8] is used. Fig. 1 shows a typical flow-chart of VASP. Input charge density and wavefunctions are independent quantities (at start-up these quantities are set according to INIWAV and ICHARG). Within each selfconsistency loop, the charge density is used to set up the Hamiltonian, then the wavefunctions are optimized iteratively so that they get closer to the exact wavefunctions of this Hamiltonian. From the optimized wavefunctions, a new charge density is calculated, which is then mixed with the old input-charge density.

The sub-space diagonalization can be performed before or after the conjugate gradient or residual minimization scheme. Tests we have done indicate that the first choice is preferable during self-consistent calculations.

In general, all iterative algorithms work very similarly. The core quantity is the residual vector

This residual vector is added to the wavefunction

, the algorithms differ in the way this is exactly done.

Alternately, the groundstate energy can be evaluated with the random phase approximation.