From Vaspwiki
Jump to navigation Jump to search

Here we present the theory for on-the-fly machine learning force fields. The theory will be presented in a very condensed manner and for a more detailed description of the methods we refer the readers to Refs. [1], [2] and [3].

Molecular dynamics is one of the most important methods for the determination of dynamic properties. The quality of the molecular dynamics simulation depends very strongly on the accuracy of the calculational method, but higher accuracy usually comes at the cost of increased computational demand. A very accurate method is ab initio molecular dynamics, where the interactions of atoms and electrons are calculated fully quantum mechanically from ab initio calculations (such as e.g. DFT). Unfortunately this method is very often limited to small simulation cells and simulation times. One way to hugely speed up these calculations is by using force fields, which are parametrizations of the potential energy. These parametrizations can range frome very simple functions with only empirical parameters, to very complex functions parametrized using thousands of ab initio calculations. Usually making accurate force fields manually is a very time consuming task that needs tremendous expertise and know how.

Another way to greatly reduce computational cost and required human intervention is by machine learning. Here, in the prediction of the target property the method automatically interpolates between known training systems which were previously calculated by ab initio. This way the generation of force fields is already significantly simplified compared to classical force field which need manual (or even empirical) adjustment of the parameters. Nevertheless there is still the problem how to choose the proper (minimal) training data. One very efficient and automic way to solve that is to adapt on-the-fly learning. Here an MD calculation is used for the learning. During the run of the MD calculation ab initio data is picked out and added to the training data. From the existing data a force field is continuously built up. At each step it is judged whether to make an ab initio calculation and possibly add the data to the force field or to use the force field for that step and actually skip learning for that step. Hence the name "on the fly" learning. The crucial point here is the probability model for the estimation of errors. This model not force field is build up from newly sampled data. Hence, the more accurate the force field gets the less sampling is needed and the more expensive ab initio steps are skipped. This way not only the convergence of the force field can be controlled but also a very wide spread scan through phase space for the training structures can be performed. The crucial point for an on-the-fly machine learning which will be explained with the rest of the methodology in the following subsections, is to be able to predict errors of the force field on a newly sampled structure without the necessity to perform an ab initio calculation on that structure. 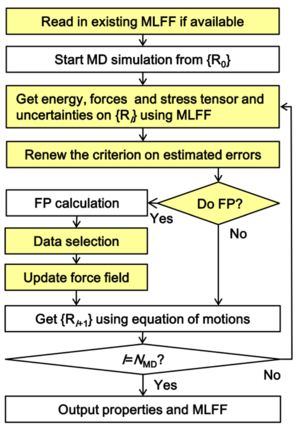 To obtain the machine-learning force field several structure datasets are required. A structure dataset defines the Bravais lattice and the atomic positions of the system and contains the total energy, the forces and the stress tensor calculated by first principles. Given these structure datasets, the machine identifies local configurations around an atom to learn what force field is appropriate. The local configuration measures the radial and angular distribution of neighboring atoms around this given site and is captured in so called descriptors.

The on-the-fly force field generation scheme is given by the following steps (a flowchart of the algorithm is shown in Fig. 1):

of a structure with

atoms is approximated as

of the probability density

to find another atom

within a cut-off radius

is a cut-off function acting outside of

is a delta function.

describes the probability of find an atom

with respect to atom

is not rotationally invariant. To deal with this problem intermediate functions or descriptors depending on

denotes the unit vector of the vector

[see Fig. 2 (a)]. The Radial descriptor can also be regarded as a two-body descriptor.

can yield the same

. To improve on this angular information between two radial descriptors is also incorporated within an angular descriptor

denotes the angle between two vectors

[see Fig. 2 (b)]. The important difference of the function

compared to the angular distribution function (also called power spectrum within the Gaussian Approximation Potential) used in reference [5] is that no self interaction is included, where

have the same distance from

The expansion coefficients for the angular descriptor can be converted to

denotes expansion coefficients of the distribution

is multiplied with an angular filtering function[6]

(ML_IAFILT2), which can noticably reduce the necessary basis set size without losing accuracy in the calculations

(ML_AFILT2) is a paramater controling the extent of the filtering. A larger value for the parameter should provide more filtering.

It is convenient to express the local potential energy of atom

is the basis set size. The kernel

measures the similarity between a local configuration from the training set

. Using the radial and angular descriptors it is written as

indicates that it is a normalized vector of

(ML_W1) controls the weighting of the radial and angular terms, respectively. The parameter

(ML_NHYP) controls the sharpness of the kernel and the order of the many-body interactions.

Similarly to the energy

. All three are fitted simultaneously which leads to following matrix-vector form

is a super vector consisting of the sub vectors

contains the first principle energies per atom, forces and stress tensors for each structure

denotes the total number of structures. The size of

is also called as design matrix[7]. The rows of this matrix are blocked for each structure

, where the first line of each block consists of the kernel used to calculate the energy. The subsequent

on basis of the training set

, which is denoted as

. For this we need to get from the error of the linear fitting coefficients

in the reproduction of the training data

which is explained in the following.

from the Bayesian theorem

where we assume multivariate Gaussian distributions

for the likelihood function

and the (conjugate) prior

need to be optimized to balance the accuracy and robustness of the force field (see below). The normalization is obtained by

Using the equations from above and the completing square method[7]

is obtained as follows

describes a multivariate Gaussian written as

and the covariance matrix

By using the relation

and the completing square method[7] the distribution of

but only for the new structure

contains the results of the predictions on the dimensionless energy per atom, forces and stress tensor. The diagonal elements of

, which correspond to the variances of the predicted results, are used as the uncertainty in the prediction.

corresponds to the probability that the regression model with parameters

. Hence the best fit is optimized by maximizing this probability. The maximization is carried out by simultaneously solving the following equations

are the eigenvalues of the matrix

The CUR algorithm starts out from the diagonalization of this matrix

is the matrix of the eigenvectors

, we search for (few) insignificant local configurations and remove them. We dispose of the columns of

that are correlated with the

with the smallest eigenvalues

. The correlation is measured by the statistical leverage scoring measured for each column

(see also ML_EPS_LOW) is the threshold for the lowest eigenvalues. One can prove (using the orthogonality of the eigenvectors and their completeness relation) that this is equivalent to the usual CUR leverage scoring algorithm, i.e. removing the least significant columns will result in those columns that are most strongly "correlated" to the largest eigenvalues.

The sparsification of the angular descriptors is done in a similar manner as for the local reference configurations. We start by defining the

denotes the number of angular descriptors given by

In this equation the symmetry of the descriptors

is constructed from the vectors of the angular descriptors

and the matrix product is done over the

elements of the local configurations.

In analogy to the local configurations the

th element of the matrix

In contrast to the sparsification of the local configuration and more in line with the original CUR method, the columns of matrix

are kept when they are strongly correlated to the

which have the largest eigenvalues

. The correlation of the eigenvalues is then measured via a leverage scoring

From the leverage scorings, the ones with the highest values are selected until the ratio of the selected descriptors to the total number of descriptors becomes a previosly selected value