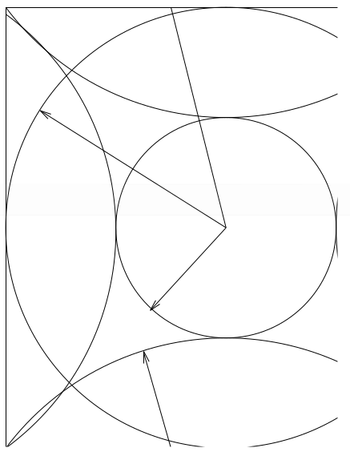 is the "longest" plane wave in the basis set:

The wavefunction is defined as

and in real space it is given by

Therefore the wavefunction can be written in real space as

The charge density is simply given by

and in the reciprocal mesh it can be written as

Using the above equations for

it is very easy to show that

Generally it can be shown that a the convolution

The property of the convolution comes once again into play, when the action of the Hamiltonian onto a wavefunction is calculated. The action of the local-potential is given by

contains only components up to

). From the previous theorem we see that

contains components up to

contains components up to

If the FFT-mesh contains all components up to

the resulting wrap-around error is once again 0. This can be easily seen in Fig. 1. Here we see that the small sphere contains all plane waves included in the basis set

. The charge density contains components up to

(second sphere), and the acceleration

, which are reflected in (third sphere) because of the finite size of the FFT-mesh. Nevertheless the components

are correct i.e. the small sphere does not intersect with the third large sphere}